News, articles and updates to keep you informed 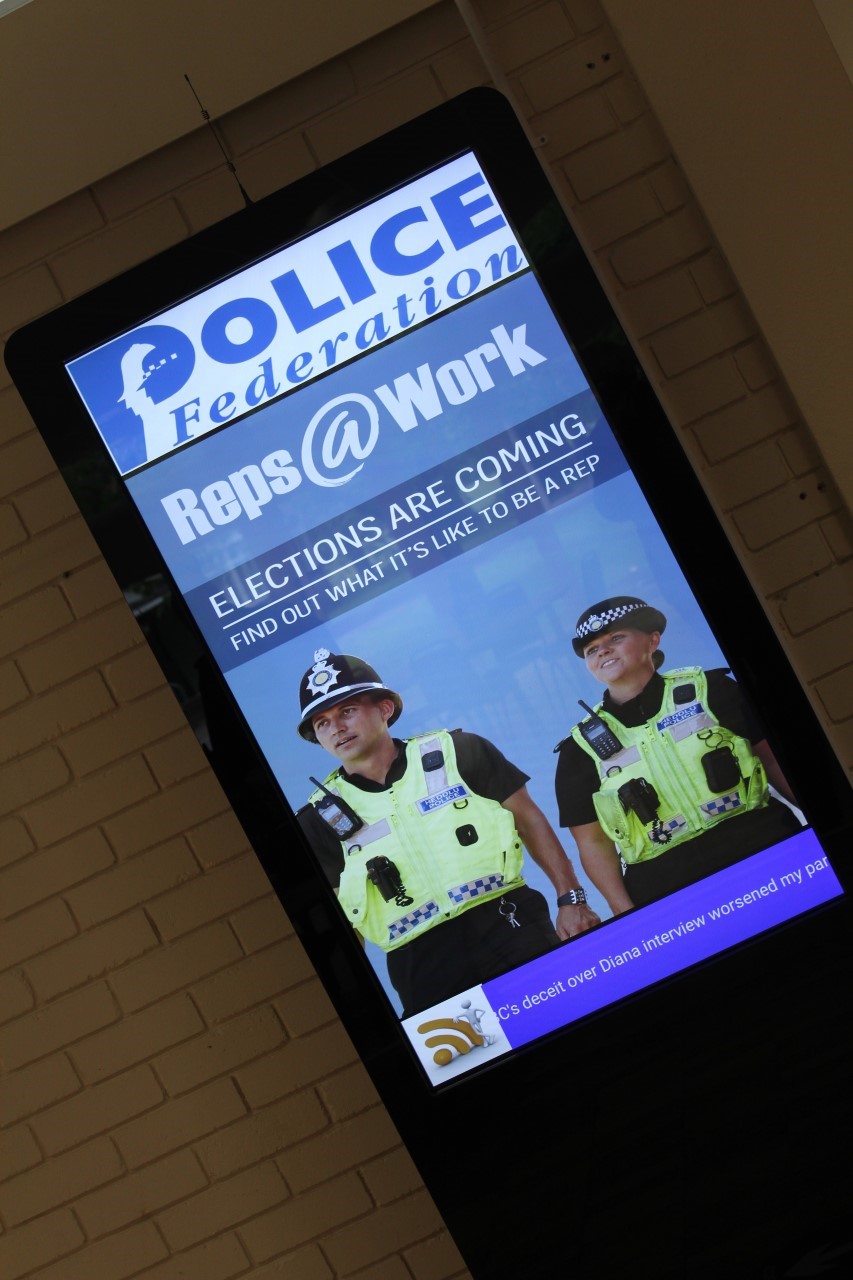 A pilot scheme to modernise information displays within police stations has gained traction within the Lancashire Police Federation, with traditional cork noticeboards being replaced with state of the art video displays.

“Many of the sites had traditional noticeboards which were congested and messages were not reaching all of our members,” reflected Sharon Wilson, Office Manager of Lancashire Police Federation.

These new 55” touch panel information terminals were planned alongside a new website and case management system to transform how the LPF communicated with its members, during a time when the daily lives of millions of people had also changed and communication between different stations was more remote.

After searching for potential providers, they found Fisher Audio Visual, who through their connections to display screen manufacturer Allsee-Tech, were able to help the LPF find the right system for them.

“The fact that we visited the site in Birmingham meant that we had a good relationship with Fishers to be able to discuss our needs from the beginning and get the right product.”

This included changing from a standard video screen display to a larger touch screen that could be used as a complete information terminal. This enables users to install a range of different content manually, including videos, slideshows, images and information pages either manually or using a dedicated content management system (CMS) based on Android technology seen in smartphones, TVs and tablets.

Ms Wilson was trained in the inner workings of the display’s CMS so she could add content herself to any of the LPF’s displays from any location.

These training sessions would end up taking the form of a distanced learning system as a result of the current circumstances. After some time learning the system, and with the help of the manufacturer and the expert technicians at Fisher Audio Visual, the displays were installed and she had full access to add content herself.

The scheme is in an early pilot phase, with five units currently installed with the touch functionality disabled. However, it appears to have already turned heads in the LPF, with the potential to expand further.

“There is still plenty of scope to improve the communication further, but overall we are pleased with the screens and hope to get some feedback from members in the near future.”

If the scheme is a success, the plan is to expand it into more remote police stations in Lancashire, as well as continue to work closely with the Lancashire Constabulary to display their campaigns as well on the LPF’s screens.

“The Force [Lancashire Constabulary] and ourselves have similar objectives for our members in terms of welfare. We have committed to continue this joint working in future.”

This website uses cookies to improve your experience while you navigate through the website. Out of these, the cookies that are categorized as necessary are stored on your browser as they are essential for the working of basic functionalities of the website. We also use third-party cookies that help us analyze and understand how you use this website. These cookies will be stored in your browser only with your consent. You also have the option to opt-out of these cookies. But opting out of some of these cookies may affect your browsing experience.
Necessary Always Enabled
Necessary cookies are absolutely essential for the website to function properly. These cookies ensure basic functionalities and security features of the website, anonymously.
Functional
Functional cookies help to perform certain functionalities like sharing the content of the website on social media platforms, collect feedbacks, and other third-party features.
Performance
Performance cookies are used to understand and analyze the key performance indexes of the website which helps in delivering a better user experience for the visitors.
Analytics
Analytical cookies are used to understand how visitors interact with the website. These cookies help provide information on metrics the number of visitors, bounce rate, traffic source, etc.
Advertisement
Advertisement cookies are used to provide visitors with relevant ads and marketing campaigns. These cookies track visitors across websites and collect information to provide customized ads.
Others
Other uncategorized cookies are those that are being analyzed and have not been classified into a category as yet.
SAVE & ACCEPT